Thank God that we get to rely on the Ancient of Days! He is still seated on His throne. He is not thrown off-kilter by the sudden shift in the world. Instead, He remains steady; He is calm.

One adjective that came to mind recently was the word “unsettling.” One day things are fairly normal, and the next, there’s a sound like a distant rattling that results in everything around you shaking.

One minute you’re in your normal routine, and the next, that distant sound becomes a blaring alarm accompanied by panic, confusion, and disoriented looks. People around you are stumbling, desperate to regain their balance on an unstable surface.

That’s how life moments can be, although they’re rarely felt by so many at one moment in time. In China, the United States, Korea, Italy—all over, really—life seems a bit unrecognizable.

Once busy sidewalks are speckled with people peering from beneath their masks, quickly moving to their destination, unaccustomed to having the ability to walk without bumping into dozens of people. Only the pigeons in Union Square have carried on their routine, enjoying the warmer weather and the tentative transition into spring. They are unphased, probably because they know the Father cares for them and knows what they have need of, even in big cities blanketed by fear.

Despite the marked changes, the one phrase that regularly comes to mind is not absent during this week of unknowns when the news speculates of more closures, as more people announce they’re sick and life essentials still haven’t been delivered to any stores. Thank God for God.

Yes, just watching the news for five minutes is enough to understand why the world seems panicked. Yes, people are pointing fingers, blaming others for this current spread of disease. Yes, things that we once thought were stable and unchangeable seem to be crumbling around us. And no, you still can’t find one bottle of wipes to perform regular cleaning tasks. But thank God for God.

Thank God that we get to rely on the Ancient of Days! He is still seated on His throne. He is not thrown off-kilter by the sudden shift in the world. Instead, He remains steady; He is calm. He sees the end from the beginning, and He has not changed.

Thank God our God does not wring His hands or bite His nails in fear. Instead, He is the one who swears by His own name. This is the same one who spoke to Jacob to reassure him of His faithfulness, not just to his grandfather Abraham or his father Isaac but to Jacob personally. At the very moment that Jacob stood at the crossroads of what felt like life and death, God interrupted the fear, the what-ifs, and the unknowns to reassert His covenantal promise, which included Jacob.

Behold, I am with you and will keep you wherever you go, and will bring you back to this land; for I will not leave you until I have done what I have spoken to you. (Genesis 28:15)

He is the same God who heard the cries of His people enslaved in Egypt and sent a means for their deliverance in the redeemed life of Moses and his brother Aaron. He remained constant when Moses hesitated and Pharaoh failed to comply and release God’s people.

Our heavenly Father didn’t panic. Instead, He instructed Moses to have the people prepare for what looked impossible. God said His people would be set free to worship Him and that His word would not return to Him void. And He brought it about through His own power for His own name.

The I Am Who I Am, the one who dried up the sea and led His people across on dry ground has given Himself to us; and He is all in. Regardless of what we face, He faces it with us, deeming our problems as His own.

Our God can look at the scars in His hands and remember being beaten, humiliated, and tortured only to face the one event no one had ever survived and everyone feared—death. This is the one who has promised, “I will never leave you nor forsake you.”

Yes, we needed that verse in the long meetings at work when our performance was under attack or when there was more month than money or when the kids’ sugar-induced energy outpaced the four hours of sleep we got the night before. It was true then. And it’s still true today; the Word is still living and active right now. He is the one who is capable of handling everything we go through.

Cast your burden on the Lord, and He shall sustain you; He shall never permit the righteous to be moved. (Psalm 55:22)

The one who walks confidently into the throne room, the one worthy to take the scroll and open its seals is the one who still extends an open invitation to all those who feel the tide of current events drawing them under.

Come to Me, all you who labor and are heavy laden, and I will give you rest. Take My yoke upon you and learn from Me, for I am gentle and lowly in heart, and you will find rest for your souls. For My yoke is easy and My burden is light. (Matthew 11:28–30)

He is the one who opened the way to the Father, the one who literally sacrificed everything so we would never be alone, so that we could be brought into the family—the way God always wanted it. He is the one who is not only unafraid of death but who triumphed over it and took the keys of hell. He is the one who has all authority in heaven and on earth. And He is still for you.

Even before Jesus took His first steps toward Golgotha, the psalmist declared,

Our God is surrounded by an eternal song of “Holy, holy, holy.” Yet He continuously makes intercession for you and your loved ones. And if that wasn’t enough, the Spirit of God, who not only kept His word but actually has enough power to reverse the irreversible, raised Jesus from the dead and now lives in you.

Lest we forget, Paul prayed the church would realize and remember the advantage that had been granted to them.

That the God of our Lord Jesus Christ, the Father of glory, may give to you the spirit of wisdom and revelation in the knowledge of Him, the eyes of your understanding being enlightened; that you may know what is the hope of His calling, what are the riches of the glory of His inheritance in the saints, and what is the exceeding greatness of His power toward us who believe, according to the working of His mighty power which He worked in Christ when He raised Him from the dead and seated Him at His right hand in the heavenly places, far above all principality and power and might and dominion, and every name that is named, not only in this age but also in that which is to come. (Ephesians 1:17–21)

This is our shocking reality. The one who is worthy of all praise and rules over all things loves us and is actively caring for us. His name is not only above sickness and disease but He is the prince of peace. He has the wisdom to lead through the most trying of times and defeat every fear.

The one who is mighty to save is still working and still saving. He is well aware of every event that will take place in the earth in intimate detail. And He actually isn’t surprised by what we describe as novel or our response to it.

He is ready, and He is willing to be Himself, to be the one who is patient with us and kind as we find ourselves adjusting and regrouping. His kindness is evident even when it feels like many are scrambling for understanding. He joyfully displays His goodness as He reveals the solutions He prepared long ago. He is still the Lord God gracious who is slow to anger and abounding in love.

He is impressively beautiful in all His ways. We get to fill our minds with the truth of His character and His deeds of old every moment of every day and invite His work into this historic age. When the latest report is issued telling us our ordinary activities are now considered dangerous and that more people are sick, we can find peace in the truth of who He is. We can turn our attention to the One who has overcome.

Then I turned to see the voice that spoke with me. And having turned I saw seven golden lampstands, and in the midst of the seven lampstands One like the Son of Man, clothed with a garment down to the feet and girded about the chest with a golden band. His head and hair were white like wool, as white as snow, and His eyes like a flame of fire; His feet were like fine brass, as if refined in a furnace, and His voice as the sound of many waters; He had in His right hand seven stars, out of His mouth went a sharp two-edged sword, and His countenance was like the sun shining in its strength.  And when I saw Him, I fell at His feet as dead. But He laid His right hand on me, saying to me, “Do not be afraid; I am the First and the Last. I am He who lives, and was dead, and behold, I am alive forevermore. Amen. And I have the keys of Hades and of Death.” (Revelation 1:12–18)

Thank God that we still have the victorious King as our hope and anchor, as our shield and rampart, as our ever-present help in times of trouble, as our comforter, and as our friend who sticks closer than a brother! He has shown Himself to be true throughout time. He is prepared to do it yet again.

Because the times we live in are . . . They are known by God. The times we live in are under the watchful gaze of our Savior. The days we’re experiencing are perfectly primed for the power of the Holy Spirit to bring about all that was promised. As things are shaken and crumbling around us, the only natural response of the human heart is to look up to see what is still standing.

As we look up, may our gaze meet the fiery eyes of the One who sent us with a message of His goodness and soon-coming return, the One who promised, “I am always with you, even to the end of the age.” Amen.

What do you find comforting about God’s character in this season? 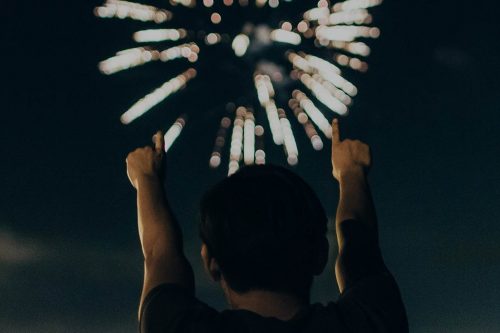 Welcoming the New Year with Hope

God making all things new is our great hope, this New Year and always!

As we see Him with a spirit of revelation we gain faith for His people, the Church. 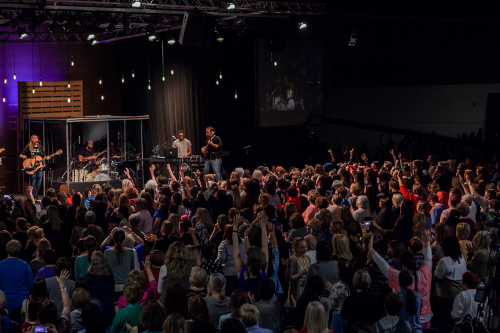 There will be many moments in life that test us and tempt us to waver from our commitments, but when we rely on the strong love of God we are strengthened to remain unwavering.